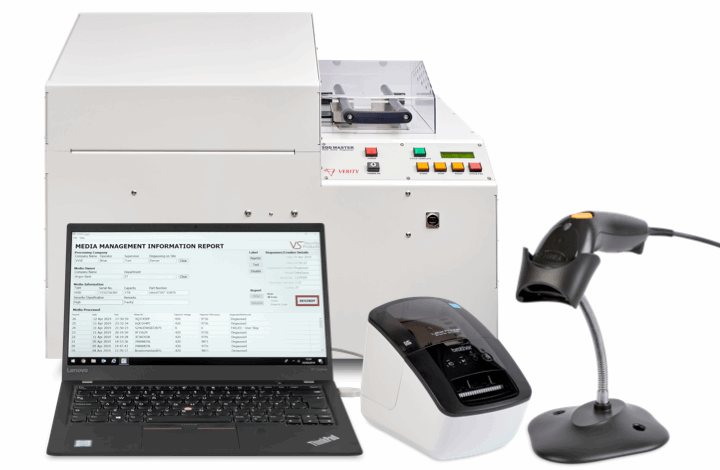 The SDD Master is an NSA/CSS Evaluated degausser data sanitisation system with a high energy, pulse discharge hard drive eraser that is designed to offer complete and secure erasure of magnetic media to the very highest level. Generating the strongest magnetic field of any degausser on the market, the SDD Master’s unique triple erase process, ensures complete data erasure every time. Where security is of the utmost importance, the Verity SDD Master should be your degausser of choice – that’s why it’s favored by government and security departments around the world.

The SDD Master degausser is fitted with the unique Data Destruction Auditor which enables you to document and verify your hard drive sanitization/erasure and create data protection audit-ready reports. The SDD Master is a self-calibrating degausser providing the user with assured erasure time after time.

The SDD Master is a fully automatic degausser.  Lift the perspex lid, insert the media into the caddie, close the lid and press the 'Start' button on the control panel. Media is transported into the degausser where the magnetic field is activated by a powerful pulse discharge. While inside the degausser, media is automatically rotated and a further two magnetic discharges are applied, ensuring complete erasure. The entire process takes approximately 75 seconds.

The processor controlled SDD Master continuously monitors the operation ensuring that the erasure cycle is completed. The operator is immediately alerted to any interruptions in the erasure cycle on the LCD control panel.

Transportation Case: An optional heavy-duty transportation case with wheels is available for the SDD Master, enabling you to safely transfer your degausser by road or air, ideal if you have a requirement to erase media at multiple locations. Click here for more information.

The SDD Master comes with a 24 month back to base, all parts and labor included warranty. Extended warranties also available. We are so confident in our product build quality that whether you opt for an extended warranty or not, our factory-based technical support team are available for free phone and email support. This support extends for the entire lifetime of ownership.

The SDD Master is listed in the NSA/CSS Evaluated Product List and is accepted by the UK National Cyber Security Centre (Formally CESG) as meeting the highest level degaussing standard.

NSA: The NSA is an agency of the US government which is responsible for protecting U.S. government communications and information systems. The NSA publishes guidance on the sanitization (erasure), declassification, and release of storage devices for disposal or recycling in the “NSA CSS Policy Manual 9-12, NSA/CSS Storage Device Declassification Policy Manual”. Within this, the NSA publish the EPL-Degausser (Evaluated Products List – Degausser) which specifies the current degaussers that have been evaluated against and found to satisfy the requirements for  erasure of magnetic storage devices that retain sensitive or classified data. The SDD-Master has been tested and evaluated by the NSA.

Many government agencies are required to manage their data security to detailed government specifications which would require them to buy an approved degausser. Safe and secure data disposal is critical within the military which is why the Department of Defense (DOD) also adheres to the guidelines outlined out in the NSA CSS Policy Manual 9-12 for the destruction of classified material. In addition, if an organization is involved in managing highly sensitive or confidential information such as financial, medical, education, personal and legal information, they must be vigilant in how they deal with the disposal of such information and the use of an approved degausser would be highly recommended.

The SDD Master also complies with the following Government Mandates that require destruction of sensitive information stored on Hard Drives and Backup Tapes before their disposal.

With safety in mind and to meet the latest ICNIRP Magnetic Exposure Guidelines, the SDD Master’s field discharge duration is less than a second and the magnetic field is designed to be concentrated inside the chamber.

(Specify voltage and frequency when ordering)

24 months back to base, all parts and labor included. Extended warranties also available.

Listed in the NSA/CSS EPL, CE

Specifications are subject to change without notice

Note: After degaussing, hard drives should not be reused as they are stressed in the erasure process. Some backup tapes may not be reusable after degaussing due to the servo track being erased.

Other products in this range