An Introduction to Degaussing

Degaussing definition - What is a Degausser?

It is a machine used to eliminate data stored on computer and laptop hard drives, floppy disks and magnetic tape, by randomly changing the alignment of magnetic domains on the medium.

Degaussing takes its meaning from Johann Gauss (1777-1855) a mathematician who studied and worked on electro-magnetic fields. Data is stored on magnetic media by making very small areas called magnetic domains change their magnetic alignment to be in the direction of an applied magnetic field. Degaussing magnetic media leaves the domains in random patterns with no preference to orientation, thereby rendering previous data unrecoverable. A degausser is therefore used to completely erase all audio, video and data signals from magnetic storage media.

This process is effective in a range of industries including video, audio, computer, broadcast and data security.

Benefits of Using a Degausser

Simply overwriting magnetic media does not completely erase data. Only a degausser can remove data 100% and ensure that confidential data is securely and completely erased. 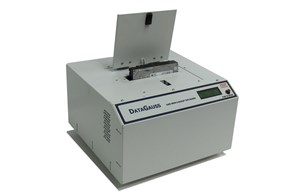 How does a Degausser work?

It works by passing any magnetic media through a powerful magnet field to rearrange the polarity of the particles, thus completely removing any resemblance of previously recorded data. Although this process of course is simple in theory, in practice, the vast variation of media formats and magnetic densities makes the correct process quite difficult to achieve. The degausser is constructed in such a way as to enable the generated magnetic field to be available to the media when it is transported through it, which can be by physically holding the media and moving it through the field by hand, having it automatically conveyed by a belt transporter or rotated on a motorized spindle.

Different media demand varying magnetic field strength, therefore the coils that generate the magnetic field will also vary depending on this requirement. Generally speaking, a coil is a degausser which should have two to three times the energy rating of the material being degaussed. Where media has a security classification, Restricted, Confidential, Secret or Top Secret, a considerably higher energy rating will be required. This rating is measured in Oersteds after Hans Christian Oersted (1777-1851) who discovered the magnetic qualities of electricity. Further efficiency can be achieved by using more than one coil in multi-axial orientation; this produces a more effective degaussing field. Even better performance can be achieved by rotating the coils or the media during the process.

The operation of degaussers will vary depending on the type and quality of media and the speed and degree of erasure required. When erasing tapes, either the cassette must move through the magnetic field or you must move a magnetic field over the cassette. In each case, the consistency of the motion, the strength of the field and the distribution of that field over the entire media are what determine the quality of the erasure.

Most professionals and engineers agree that a conveyor transport degausser, which allows the user to place the magnetic media on a small belt, which in turn passes the media through or over the degaussing coils at a constant speed, assures the most uniform process. Custom-designed degaussers can assist with the specialist needs of bulk operators with belt feed conveyors; collection hoppers are available to deal with tapes, disks and reels, all helping in making the operation effective & efficient.

Effective degaussing is very much a performance factor of the machine and generally passing the media through the field twice does not improve the effectiveness. If however the media is rotated by 90 degrees, some improvement can be achieved. VS Security Products have developed an eraser employing "state of the art" technology that uses a rotating coil technique. The media passes on a variable speed conveyor belt through a field, generated by two powerful coils, which are rotating, one above the media, the other beneath it.

With the ever-increasing demand to fit more & more data on smaller media, there is now a requirement that can be more important than absolute erasure. That is consistency of erasure.

The resultant benefits are substantial, producers of audio and video tapes achieve better yields as well as increased quality. Data users enjoy greater efficiency due to considerably reduced "error rates". Professional users in every sector, from government to business, benefit from incorporating degaussing within their magnetic media processing procedure and achieve considerable cost savings by being able to confidently reuse again and again media previously discarded. All in all there is a very strong financial and operational case to use degaussers, especially manufactured by the world's leading specialists, VS Security Products .

The controlled application of degaussers to the process involved in the production & operation of magnetic media can achieve considerable savings. For a start, many operators who do not currently degauss, simply throw away suspect media that, with a careful process of degaussing applied to it, would have a considerable extended life. Many operators claim benefit of up to four times the useful life of some types of media.

Further direct & indirect savings can also be achieved. Quality of performance of the media has a very high value, although it would be difficult to qualify. Indirectly, there are additional cost savings to producers and to end users due to the considerable reduction of "down time" of computers and data processing apparatus arising from faulty or imperfect magnetic media being used. Diskette duplicators claim to gain upwards of 25% better production yields directly attributable to degaussing their bulk bland diskettes, prior to processing.

Another benefit is that magnetic media is very difficult to dispose of. If it is burned, it emits toxic fumes, if it is buried, it is not biodegradable. By re-using your media as many times as possible, you are adding you your company's recycling programme.

The amount of magnetic media used in the broadcast, computer and software industries has resulted in professional users striving to achieve higher quality and efficiency, whilst at the same time searching for cost savings. By degaussing magnetic media using "deep erasure", created by powerful magnetic fields, users or producers find that previously recorded data, or certification signal can be eliminated completely from tapes, cassettes or cartridges. The effectiveness that this method of erasure achieves far exceeds that of DC erasure (this is the method that is used in hard disk drives).

Points to Consider When Choosing a Degausser

Who uses a Degausser?

Anybody who uses magnetic media will benefit from the use of a degausser, including:

The term magnetic media covers a vast range of material from audio/video tapes and cassettes to computer diskettes and reels, supplied in a wide choice of sizes and complexities. All of them however, perform in the same basic way yet have significantly differing characteristics in performance and in operation that will require differing erasure processes.

Magnetic media consists of material that is coated with minute metallic particles that react to magnetic influences applied to them. Such influences fall into two types.

The first is the intended influence or signal that provides the desired "Play-back" from the original recording. Ideally the reply should replicate the original recording, whether this is from audio, video or computer data source. The second influence is the unwanted signal, which can take the form of distortion, bias, corruption or interference and can produce undesirable effects such as poor quality audio or video media or software glitches in data material. Clearly any process which enhances the first and eliminates the second is desirable and a degausser can achieve this.